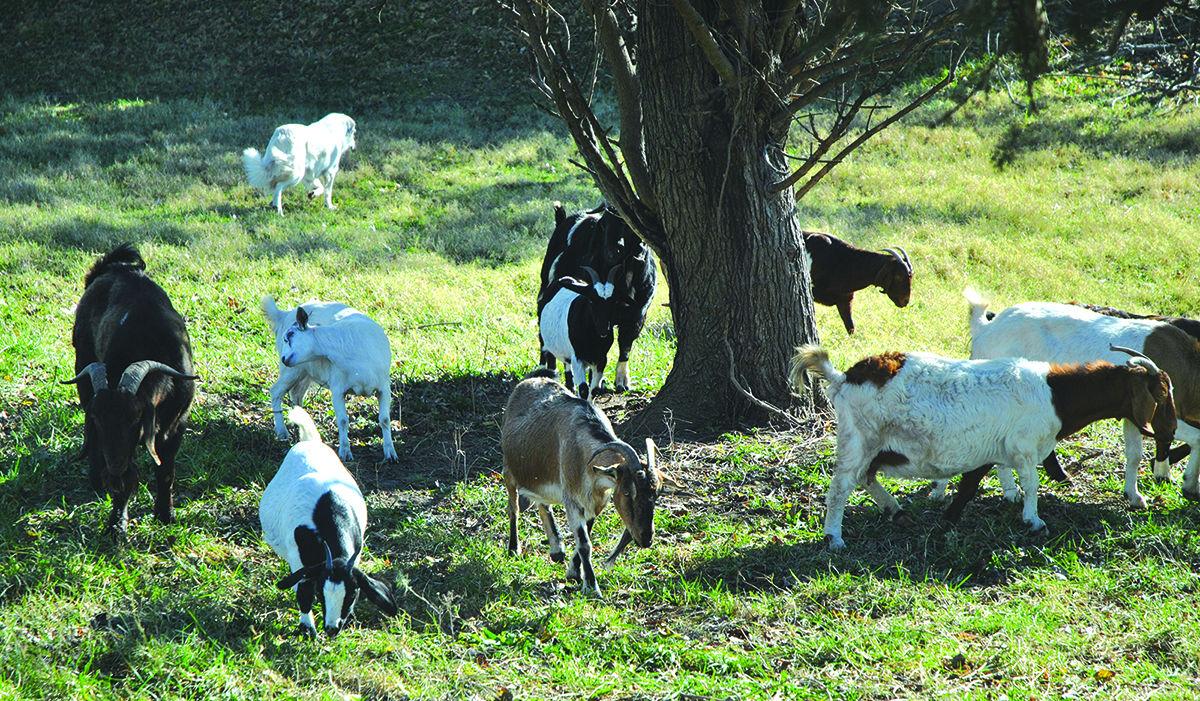 A herd of goats helps the City of Chanute maintain grass and brush at the former wastewater treatment facility. 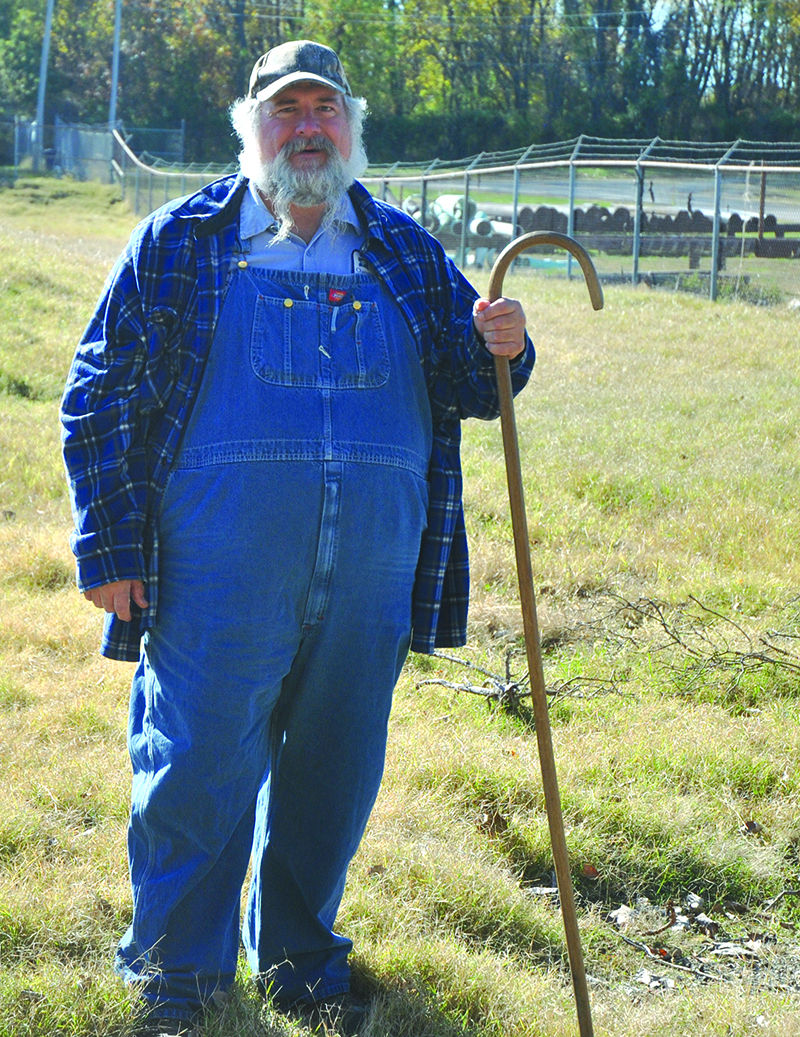 Water treatment plant foreman Marc Christiansen owns and is financially responsible for the herd of goats being used by the city.

A herd of goats helps the City of Chanute maintain grass and brush at the former wastewater treatment facility.

Water treatment plant foreman Marc Christiansen owns and is financially responsible for the herd of goats being used by the city.

Every day, a group that does a vital service for the City of Chanute can be seen behind the water treatment plant. They are either lying around with their mouths full of grass, taking frequent naps, or frolicking and roughhousing around unused water tanks.

Christiansen has worked for the city for more than 20 years, and been raising goats as a hobby for seven years. He uses the animals to keep brush maintained on his own property, and thought that they would come in handy to perform similar duties on difficult-to-maintain property owned by the city.

“It’s amazing how much they eat,” Christiansen said.

Christiansen is financially responsible for the care of the goats, which mainly consists of medicine, vaccinations, and dealing with issues like worms. So these goats perform a valuable service to the city without incurring any cost to taxpayers.

He said that the pipes, valves,  buried  rocks,  and  tanks on the on the site of the former wastewater treatment plant made it a challenge for city employees to mow and maintain.

“It was tearing up our mowers,” he said.

Instead of having city workers try to maintain this property, goats now eat leaves, grass and brush.

According to Chanute City Manager Jeff Cantrell, using these goats allows the city to keep difficult areas free and clear of poison ivy and other noxious weeds and vegetation.

Cantrell was surprised to learn that goats enjoy eating poison ivy, and was glad this preference keeps city work crews from being exposed to unwanted skin reactions. Now, city employees don’t have to worry about being exposed to the abundant poison ivy in this area.

Christiansen said the goats love poison ivy, that it is like candy to them and that it has no noticeable negative effect on their health.

Occasionally, a goat will fall into one of the tanks that line the unused wastewater treatment facility, inspiring Christiansen to build what he calls “goat ladders.” These are just boards nailed across the tank, helping the goats climb out on their own.

“They don’t really go down there a whole lot, but in the spring when they have their kids, the kids will go into the tanks because they haven’t figured it out yet,” Christiansen said.

He said that one of these “goat ladders” currently needs to be secured, because a goat that uses it to climb into the tank damaged it in the process.

“Then, they can’t get back up,” Christiansen said. “That’s when I have to get a ladder and climb down there to put it back up, and they’ll start climbing up before I’ve even got the board secure, while I’m still holding it up over my head, because they know that’s the only way out.”

A Great Pyrenees dog is also on the property, helping Christiansen work with and keep an eye on the goats. The dog protects the goats by keeping out predators like foxes, as well as unauthorized trespassers.

“She’ll usually sit up on a hill somewhere, or get pretty high to where she can see them all,” Christiansen said. “If somebody’s walking down the street, she’ll be right at the fence barking at them. She’s just letting them know she’s over here, and that they don’t need to be. And she treats foxes the same way.”

An electrified fence is also used to keep the goats on the property, although Christiansen said there is one goat who tendd to escape from the enclosure every once in a while.

“The fence doesn’t really bother her, because she’s got a thicker coat than the rest of them,” Christiansen said. “She gets out, and grazes around the property, and then waits over by the gate because she knows that eventually I’ll be coming down there to let her in.”

There are a couple of male goats on the property, along with a big group of female goats. Breeding the goats helps the city replenish the supply of goats that maintain the plant and the city-owned lots that surround it. Christiansen tries to time it so the goats won’t have kids in the cold winter, preferring that they give birth in the spring. The males are kept separated in the summer months, and allowed to mingle with female goats in the winter.

Christiansen noted that when the goats first started occupying this property, thick brush and leaves covered parts of its fence and most of the north side of it. Now, that side is pretty clear of debris.

“They keep it trimmed down, so we don’t have to pay for fuel to mow it anymore,” Christiansen said.

Immediately behind the area where the goats reside are lagoons that were used as drying areas for sludge from the treatment plant, that used to be completely covered with trees. Christiansen said that trees that were cut down back there were immediately stripped of their leaves by these goats.

“They leave nothing but sticks, and that’s one way that they help us clear trees,” Christiansen said.

Goats were also given access to the city-owned vacant lot immediately north of the plant, helping clear trees and brush there. The grass in this field has been cut for hay to feed these goats during snowy weather.

These goats are known to people who live in the immediate area, and those who visit the water treatment center or the adjacent city animal shelter. However, most residents don’t even know about this herd of goats that work for the city.

Christiansen cited instances when cities, states, and even the federal government have used goats for maintenance and brush control. He pointed out that this is common in western states like California, to cut down on the number of wildfires.

“They strip everything, and what catches fire is the underbrush,” Christiansen said. “So, the goats get rid of that for them.”

While Christiansen does have to keep an eye on this group of goats, they have made his job easier and provided a great benefit to the city. Maintaining the property with the goats has proven to be less expensive than maintaining equipment, paying employee wages, and dealing with issues like workers comp.

Cantrell estimated that use of the goats on this property instead of mowing by employees of the water plant probably saves the city up to $2,000 per year. He added that the goats make these facilities look better than otherwise possible.