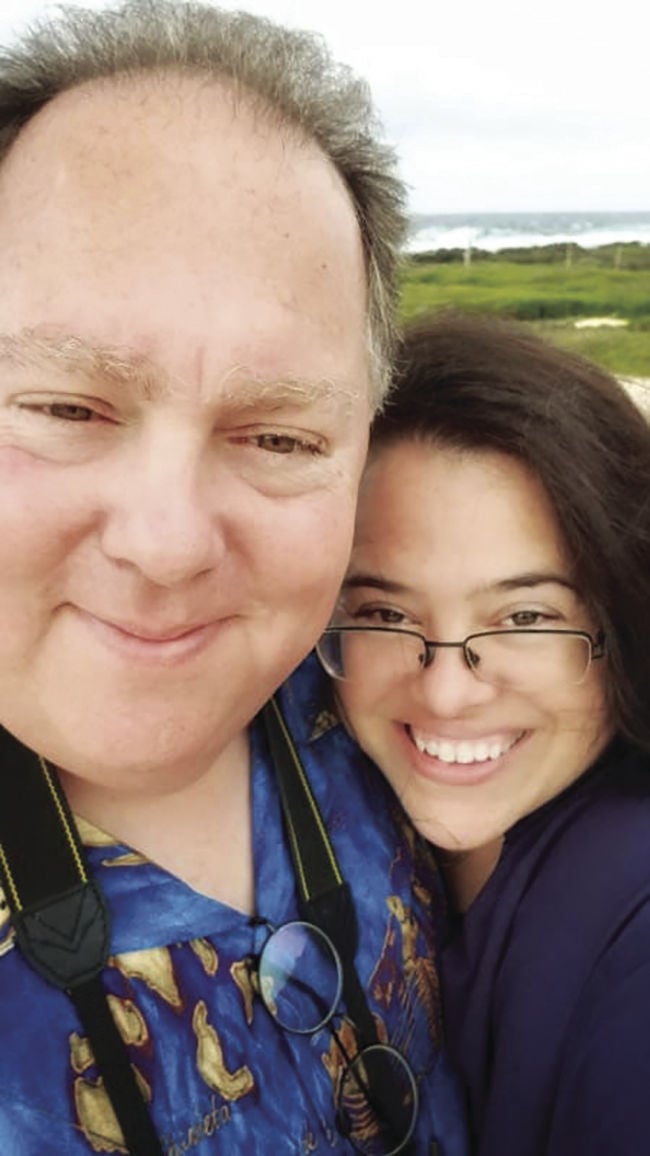 Lloyd Zimmer and Jacquelyn Borgeson Zimmer will be presenting their travelogue on adventures in the South Pacific in the island chain nation of Vanuatu. 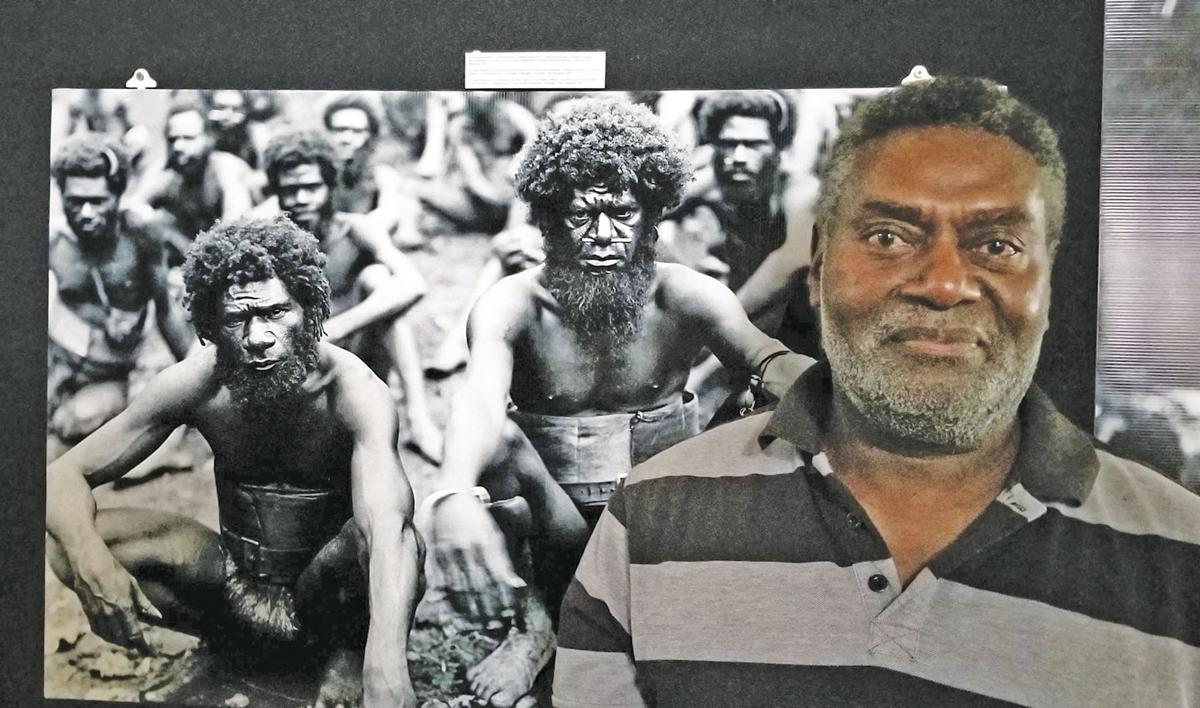 Patison Arnhambath stands in front of one of the photos of his grandfather Nihipat at the 100th exhibition in Port Vila at the Vanuatu National Museum. Jacqueline Borgeson Zimmer said that after her presentation where she had shown photos of Nihipat on movie lobby posters, Patison gave her a bear hug and told her through his interpreter that he knew his great-grandfather was a legend in Vanuatu, but had no idea he was a Hollywood star, too.

Lloyd Zimmer and Jacquelyn Borgeson Zimmer will be presenting their travelogue on adventures in the South Pacific in the island chain nation of Vanuatu.

Patison Arnhambath stands in front of one of the photos of his grandfather Nihipat at the 100th exhibition in Port Vila at the Vanuatu National Museum. Jacqueline Borgeson Zimmer said that after her presentation where she had shown photos of Nihipat on movie lobby posters, Patison gave her a bear hug and told her through his interpreter that he knew his great-grandfather was a legend in Vanuatu, but had no idea he was a Hollywood star, too.

Jacquelyn Borgeson Zimmer, curator of the Martin and Osa Johnson Safari Museum, and her husband Lloyd Zimmer commemorated the centennial of the Johnsons’ expedition to the South Pacific island nation of Vanuatu by visiting the islands themselves. Thursday evening, they will host a travelogue at the museum about their 16-day trip – and all of the misadventures that were involved. The travelogue begins 6:45 pm and is free to the public, but seating is limited.

The trip was both business and pleasure, with Borgeson Zimmer receiving a grant from the United States Embassy to go to the capital of Vanuatu, Port Vila, and giving a presentation to the national museum of the country about what the Johnsons had documented about the island 100 years ago. Borgeson Zimmer talked about the Johnsons’ work in Vanuatu in a standing-room-only crowd. Their work in Vanuatu ultimately opened up many doors for more exploration on the islands.

Zimmer was very proud of his wife’s presentation and was astounded at the reaction afterward, saying that he and Borgeson Zimmer were both surrounded with people who wanted to help them find out more, as another goal of the trip was to identify everyone in the photos the Johnsons took. Borgeson Zimmer explained that it was an important aspect, as the museum has changed its focus.

“The museum changed its mission a couple of years ago,” she said. “It had been to preserve Martin and Osa’s legacy, but now we want to be a world-class biography museum with every person in the photos identified and biographed – not just Martin and Osa’s story.”

Notably in attendance was a great grandson of the Big Nambas Chief Nihipat that Martin and Osa had filmed and met with 100 years ago. Patison Arnhambath is now himself a chieftain of the Big Nambas, and expressed his excitement about seeing the photos of his great-grandfather without speaking a word of English.

“He was able to make it clear that he was so happy to see his great-grandfather,” Zimmer said. “He had heard stories, but he was so grateful to see it. This warrior chief kept shaking my hand; it was so humbling.”

'Queen of Katwe' actress dies at 15

John Avlon: Why is Trump pumping up Bernie Sanders?

Arnhambath invited the Zimmers to stay in his home in his village of Tanmarou, on the island of Malakua where Martin and Osa filmed. However, a death in Arnhambath’s family led to the stay not being possible, but he ensured that they had other accommodations on the island. The cottage where they stayed coincidentally overlooked the very beach from which the Johnsons had to be rescued during their first expedition to the island.

Borgeson Zimmer explained that during the first trip the Johnsons took in 1917, a life threatening situation seemed to emerge with the local cannibals when the Big Nambas Chief Nihipat decided he wanted to keep Osa as a wife for himself. They fled, leaving behind most of their gear but escaping with about 10 minutes of footage. The Johnsons then returned to the island in 1919 with translators and armed guards, which is when they were able to befriend the tribe. The Zimmers got some firsthand experience with troubles getting off the island as the flights and ferry services back to Port Vila were limited and sporadic. Some of the same difficulties were noted in Martin’s journals from 100 years before.

“Martin warned us how difficult it was getting around the islands,” Borgeson Zimmer said. “The consensus was that it was worth it. We would do it all again, as uncomfortable as some of it was.”

The transportation trials did allow for some chance meetings that ended up being very valuable. They met Vianney Atpatoun, the very first indigenous museum director in Vanuatu who ran the Malekula historical center. Atpatoun is also a practicing medicine man who has visited Chanute and the original Safari Museum on Grant Avenue in 1986. While visiting the museum, he performed an exorcism on an artifact and went to the cemetery where he reportedly visited with Martin. It was documentation from the Johnsons that led to Atpatoun establishing the historical center on the island.

“The entire trip was extremely serendipitous,” Zimmer said. “One door would open another door, we could have spent two more months there learning.”

Borgeson Zimmer was very impressed with how relevant the 100-year-old Johnson materials were, and how much they impacted Vanuatu. There is still something on the islands that is named after the Johnsons 100 years later, but she was very mysterious on the specifics, withholding that information for the travelogue itself.

Overall she thought that it was a trip the Johnsons would have approved and she is excited to recount the adventure.

“Despite not doing it the way I wanted to do it, I got to do it in a way Martin and Osa would have approved of,” she said. “(Vanuatu) was where Martin first got his start travelling with Jack London as a teenager and it was the one place he wanted to take his new wife. It was an important place for them both and being able to walk in their footsteps was incredible.”