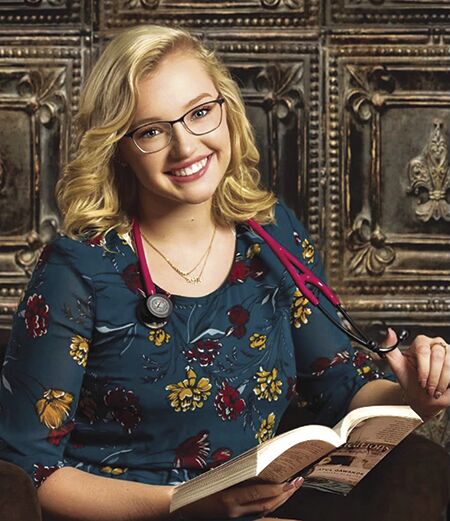 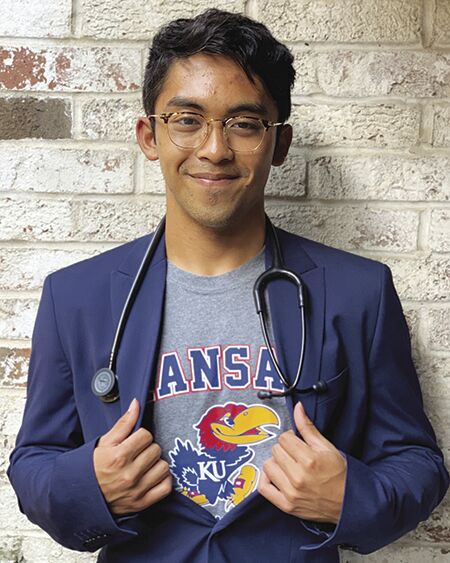 The University of Kansas duo was recently selected for the School of Medicine’s Scholars in Rural Health program.

The program provides its scholars “assured admission” to KU’s School of Medicine upon successful completion of program requirements and graduation with their undergraduate degrees from KU.

According to the program’s website, students in the Scholars in Rural Health program “discover the rewards and challenges of rural practice as they prepare for entry into medical school.”

The program is designed to expose students to an array of healthcare services in rural areas, including hospital and office practices. As part of the program, soon-to-be juniors Morris and Andoyo will be assigned a medical mentor who is located in the region of their home community. They will shadow the mentor for a total of 200 hours.

Morris will be shadowing Dr. Ross Kimball, a family practice physician based out of Garnett. Andoyo has yet to be assigned a mentor.

“It’s absolutely incredible – I couldn’t be more excited,” Morris told The Tribune. “It’s such an honor to be with the other scholar students. I really love this program because of its intent to serve rural areas, which are generally underserved. I think that I’m a perfect fit for it.”

The process for entrance into the program was intensive, including a series of interviews and several essays. Morris said she experienced a roller-coaster of emotions upon receiving the news of her acceptance into the program. The school mistakenly sent out rejection emails to all applicants. They quickly corrected the miscue, and Morris was sent an email confirming her acceptance.

“It was a scary six minutes,” Morris said. “I started going over my application and notes I took for my interviews, trying to figure out where I went wrong. But I was thrilled when I received the corrected email from them.

“I’m looking forward to making connections with my peers, other scholars, through this program,” she said. “And I’m really excited about the shadowing opportunities provided by the program, and really love that it’s centered around rural health.”

Morris is a human biology major at KU and currently holds a 3.8 GPA. While at Chanute High, she gained valuable experience via the school’s biomedical career pathways program. She noted that CHS Project Lead the Way career pathways instructors Tonya Frederick and Mandy Duling were instrumental to her current success.

“They were huge influences during my high school career, setting me up for college,” Morris said. “They did a fantastic job preparing me for KU, to where I didn’t walk in totally lost.”

Morris has prior shadowing experience under her belt, having spent three years under the tutelage of Dr. David Guernsey, a family medicine specialist at Chanute’s Ashley Clinic.

“It was amazing,” she said of her time at the Ashley Clinic, noting that Guernsey has been her biggest influence on her path to a medical career. “I truly didn’t know any kind of specialty or area of medicine I wanted to go into. But when I shadowed Dr. Guernsey, I was able to see the charm of being in the clinic and the range of cases and patients. I just kind of fell in love with it. I don’t think I could ever love anything else as much as that.”

Morris confirmed that her passion lies with family medicine.

“I really love it, it’s just a little bit of everything — and I like everything,” she said.

Morris said she has thoroughly enjoyed her experience at KU, citing the diversity of Lawrence.

Bob Woodward: You could write a whole book on Lindsey Graham

“I’ve made so many friends that I am completely different from, and around Chanute I never really had that,” she said. “I’ve met so many people at KU that have had different experiences than I have.”

She said her fondest KU memories include having coffee with friends at the student union between classes.

“It was just nice to have a little break during the middle of the day and to chat with them,” she said. “It was probably my favorite part of the week.”

Morris said that after graduation, she plans on returning to Chanute and hopes to work at the Ashley Clinic.

“I love the atmosphere and clinic charm,” she said. “To be a family physician there would be my absolute dream.”

Morris dished advice for CHS students on the fence about pursuing a career in the medical field.

“The jump seems huge, but it’s not as scary as you think,” she said. “Taking everything one step at a time makes it so much easier.”

Andoyo also has previous medical-shadowing experience, having done that at Neosho Memorial Regional Medical Center. Andoyo’s shadowing was primarily related to general and orthopedic surgery, while he gained further experience in the ER and ICU.

“I was able to see what physicians were doing every single day,” he said. “I’ve gotten that clinical experience, so I could see the teamwork aspect of healthcare, and how the entire system functions in general.

“It was a great experience and it was really cool just hanging out with all the nurses. I know as a physician you’ll be working with a lot of nurses. They really make the hospital work and kind of carry the entire hospital. So it was really important to learn and form connections with them.”

Andoyo said he’s undecided on his specialty, but indicated it will likely be closely related to his prior shadowing experience.

“I’m really interested in coming back to rural areas and giving back to the communities that have helped me out during my entire process,” he said.

“That really helped out a lot, especially with the multiple mini-interview format,” he said.

Andoyo also said his biggest influences were Frederick and Duling. Like Morris, Andoyo is a human biology major and holds a sparkling 4.0 GPA.

“Utilize your options you have at Chanute High School,” Andoyo said of advice he would give to current students.

Andoyo said he’s loved his time at KU. His favorite memories there include attending a Jayhawks basketball game with his family and sledding on-campus.

How do you grade Nebraska's hire of Trev Alberts as athletic director?