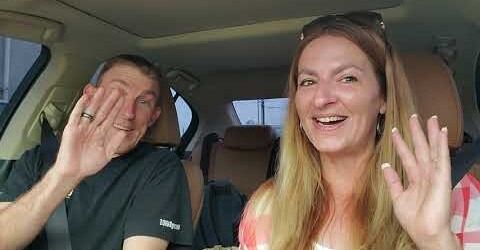 Former Chanute resident Jason Dent and his wife,  Sacha, on the road for Kansas Treasure Hunts. 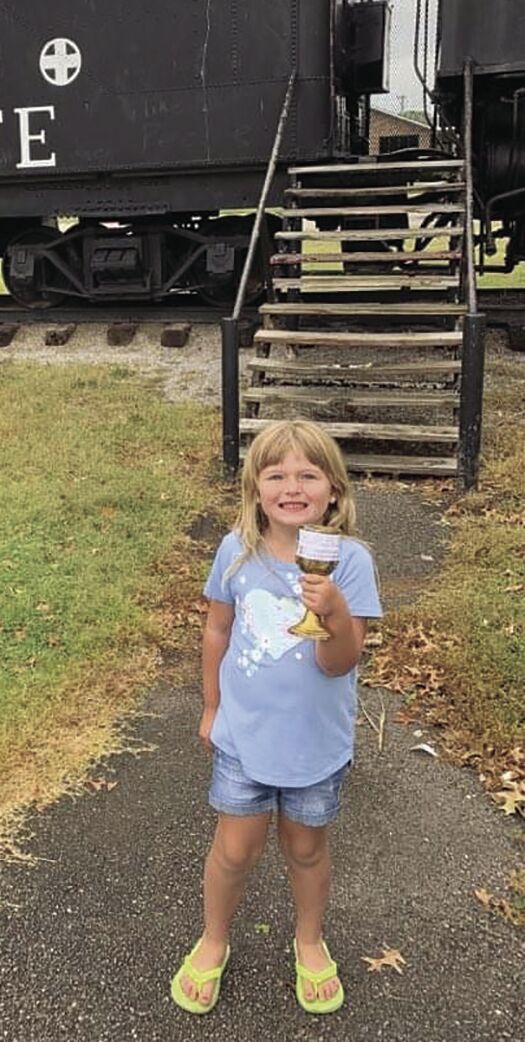 Former Chanute resident Jason Dent and his wife,  Sacha, on the road for Kansas Treasure Hunts.

Engine No. 762 held a special treat for a five-year-old girl and her father last weekend, courtesy of a former Chanute High School classmate.

Since June, a Junction City couple Jason and Sacha Dent have created treasure hunts, the most recent of which was Saturday in Santa Fe Park. Jared Treloggen and his daughter, Lillian, found the treasure, hidden in the locomotive cab.

Sacha Dent said she and her husband are both treasure hunters, and they established Kansas Treasure Hunts to help spread joy and provide relief from the pandemic through a family-friendly activity.

They place a treasure, such as a $20 bill or a small chest of quarters, dimes and other silver coins, then post clues to its location on social media. They have done treasure hunts roughly weekly.

Sometimes the clue will be an image or a riddle. Sacha said they like to incorporate Kansas history in the treasure hunts.

Sacha, who is from New Mexico, said she and Jason met while on a treasure hunt and married about a year ago. Jason has been in the US Army for 22 years and is nearing retirement.

Sacha said they want to do hunts all over Kansas and have done them near Wichita, Topeka, Junction City and Salina. But Jason is stationed at Fort Riley, which requires that he stay within a 150-mile radius, making it a challenge to travel farther for the hunts.

Saturday, they came to Chanute to visit Jason’s mother, and placed the treasure in the locomotive shortly after noon.

They posted the hunt online shortly after that, and were talking about wrapping up their visit to head back when they got a telephone call from Jared that the treasure was found.

“I heard him and the most excited little five-year-old girl you have ever heard,” Sacha said.

The actual prize was a metal detector, donated by Streamline Engineering.

To protect the actual prize from weather or other damage, the Dents sometimes hide a proxy treasure. In this case, it was a gold chalice (don’t tell Lillian, it’s actually brass).

“I would be sure she slept with it that night,” Sacha said.

The clue for Saturday’s hunt was a picture of the world, symbolizing downtown Chanute’s Google Earth, below a biplane glider with the number 762. They also added a second clue that it was in SEK.

“The glider was what gave it away for us,” Jared Treloggen said.

He said he has been following the hunts since they started, hoping to find one nearby. He thought it was really cool.

“What they’re doing is awesome,” he said.

Sacha said their shortest treasure hunt lasted an hour, while the longest was a week. That was not because the hiding place was particularly difficult, but they partnered with someone else who placed it near a hiking area that did not get much traffic except on weekends.

Each treasure has a note with a telephone number for the finder to call. The note identifies the object as a treasure, in case the find is accidental by someone who does not follow social media.

“We’re okay with that,” Sacha said.

Once, they hid a $20 bill in the pages of a book at a Manhattan bookstore. A random customer found it in the Travel and Adventure section.

Sacha said the difficulty is related to the value of the prize. Bigger prizes are harder to find, and some people won’t drive a long distance for a small prize.

They are currently self-funded, but discussed setting up a non-profit organization. The Dents also stage private treasure hunts for families or as team-building exercises. They are planning one for a Boy Scout troop where the Scouts can earn badges and the Dents can donate camping equipment.

Information on the hunts is available at facebook.com/KansasTreasureHunts

On their first hunt, the finders woke up at 4 am, drove two hours from Kansas City to Hermit Cave near Council Grove and found a chest of silver coins.

“The wife called, crying,” Sacha said, telling Sacha that the couple had recently been laid off as a result of the pandemic and were going through some difficulty, so the treasure hunt was something they needed.

“Every single time, it is like that,” she said. “Joy, excitement, a sense of adventure.”