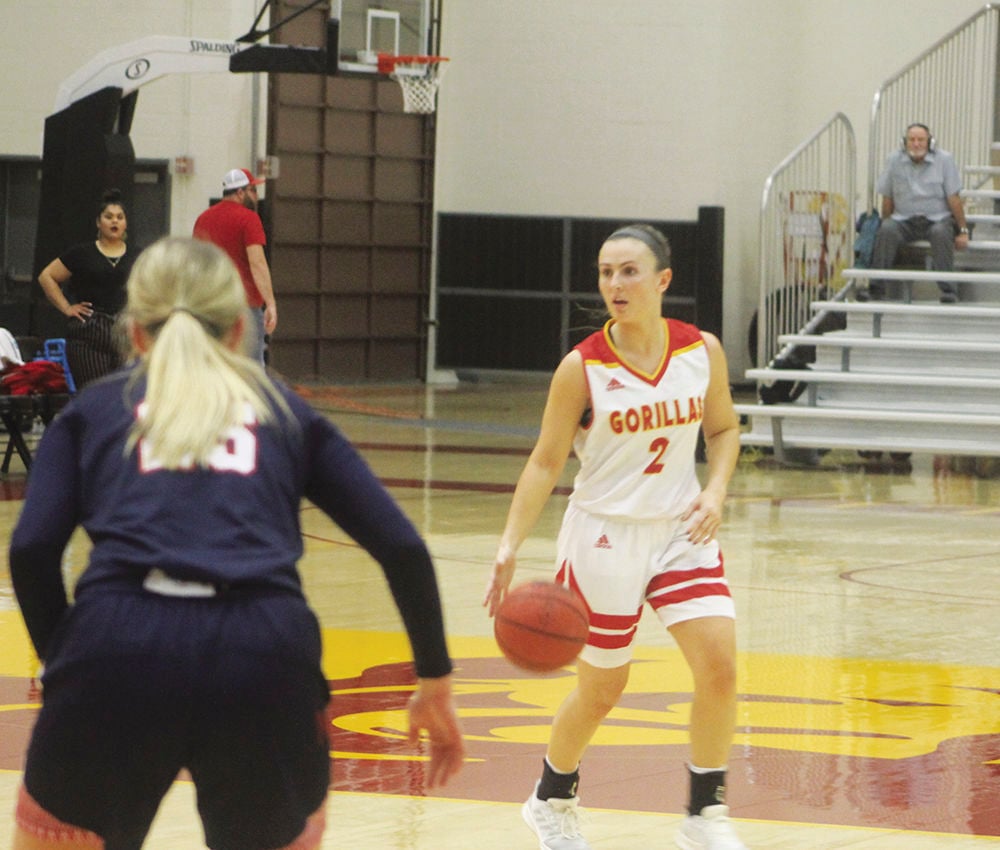 Kaylee DaMitz analyzes the offense in a game versus Newman. Pitt would win 81-69 behind her career-high of 11 assists, as well as her 15 points. Robert Magobet/Tribune 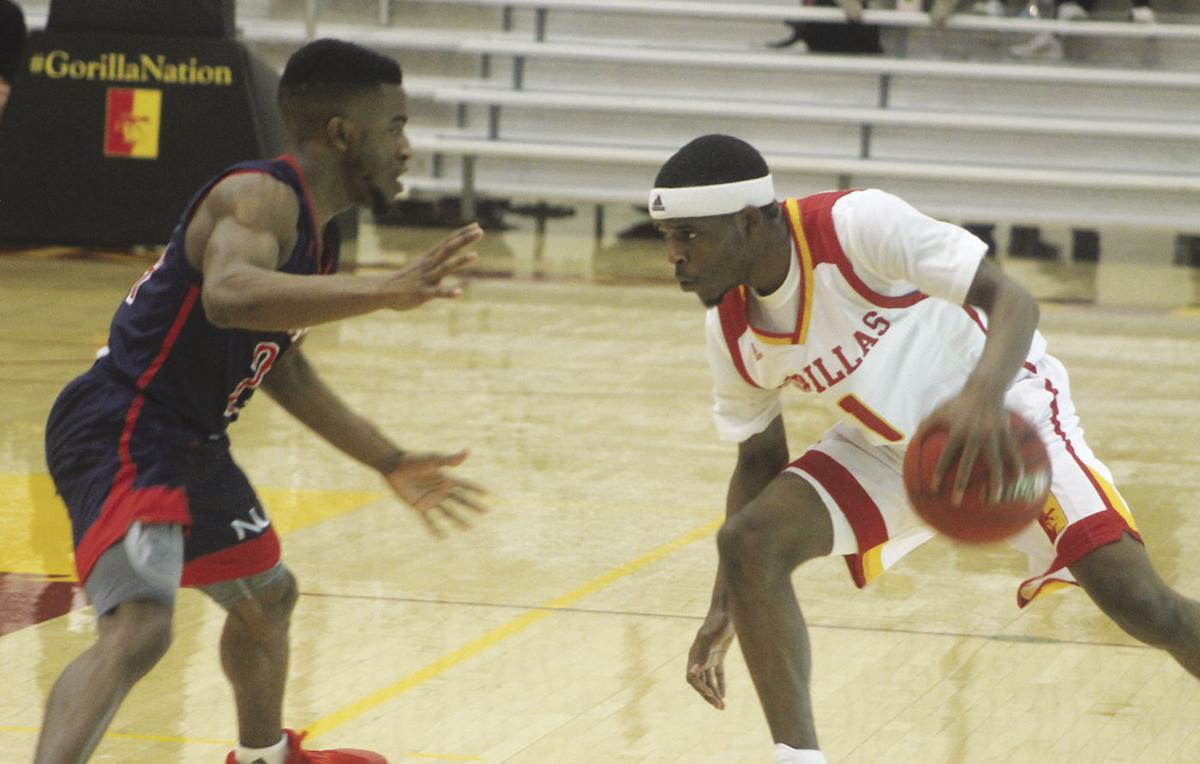 Kaylee DaMitz analyzes the offense in a game versus Newman. Pitt would win 81-69 behind her career-high of 11 assists, as well as her 15 points. Robert Magobet/Tribune

PITTSBURG – Kaylee DaMitz closed the door for Newman on Thursday at the John Lance Arena.

Pittsburg State University’s starting guard and the 17th leading scorer in the MIAA, DaMitz hit a 3 with 6:45 left in the game. This bolstered a 13-5 run, and assisted an 81-69 win over Newman University, which marked the fourth win in five games.

DaMitz chalked up 15 points and 11 assists, a career-high and her first double-double of the year. For Pitt, Labette County product Tristan Gegg, the leading MIAA scorer, racked up 14 points, while Meghan Maher tallied 12 and Ashton McCorry had 10.

DaMitz said it was a total team effort.

“I gotta give a lot of credit to my teammates because I can’t get 11 assists without my teammates,” DaMitz said. “I like to do what’s best for the team, whether that’s passing or doing whatever. My coach in high school said you don’t have to make the play, but you have to make the right play. That stuck with me because here I am trying to break the assist record – that’s a goal I have.”

Last year the Gorillas started out with a 10-3 start – Pitt State lost in the first round of the Central Regional in the NCAA Division II National Tournament – and through 13 games this year, Pitt is 8-5. But some aspects in the Newman game that may forestall losing tendencies included the shooting and rebounding. PSU shot 52 percent from the field, 44 percent from 3, and out-rebounded Newman 37 to 26.

Head coach Amanda Davied said there were aspects that were substantially better in this game than the Fort Hays State game, when PSU lost by a point.

“We wanted to be better rebounding – that’s kind of been our nemesis all year,” Davied said. “It’s been our goal to be better rebounding, better defenders. We know we held Hays to 75, which is still a lot of points. And then these guys (Newman) 69, so we are still working on that. But I was proud that we only gave up six offensive boards tonight. And the three-pointers, we held Hays to five, Kearney to four, and so that was actually an emphasis. We didn’t do real great on that, but we did get into some other areas that we really wanted to. Overall, really proud we won the rebounding war. That’s the biggest thing.”

Pitt State lost a close game 88-86 to Central Oklahoma on Saturday at home. Gegg led the way with 26 points, while Athena Alvarado scored 23 and grabbed 11 rebounds. Up next, PSU women (8-6) will play at Central Missouri Wednesday.

PITTSBURG – AJ Walker was a man amongst boys on Thursday at John Lance Arena.

With under a minute to go, Pittsburg State’s point guard drove to the hoop, where he was fouled before sinking two critical free throws. Marcel Cherry stole the ball. Christian Edmondson had one of the biggest blocks of the game.

Packers notes: Despite loss, 2019 was ‘special’ season for Aaron Rodgers ‘because it became fun again’

Walker staying aggressive and these plays down the stretch led to a 65-62 win over Newman University, improving PSU’s record to 6-8.

Walker, who had to sit out fall semester because he only has one semester of eligibility left, said he has the utmost confidence when his number is called.

“I work hard for it, my team believes in me, and when the team believes in me and the coach believes in me, you have to believe in yourself,” Walker said. “And I put a lot of hours in this gym doing that same floater, doing that same drive to the right. It’s just confidence. Stay positive no matter what’s going on. We focus on fighting adversity. I mean the game is full of runs. You just try to get the last one and come out on top. We have a turnover, or a bad shot, or a bad foul, keep encouraging everybody to stay positive and think about the next play.”

The next game is what the Gorillas will need to focus on. Last season the Gorillas got off to a 9-5 start before losing in the MIAA Tournament Semifinals. And while Pitt State was 6-8 through 14 games, the silver lining is that the team will not quit down the stretch. What’s more, in the Newman game, the Gorillas shot the ball at 47 percent versus 40 percent for the Jets. The turnover battle was a tie, as both teams committed 14. Other stats were was virtually even, but head coach Kim Anderson said it came down to his point guard Walker.

“He’s really the only guy that has a lot of experience, and obviously I have a lot of trust in him,” Anderson said. “And I think he’s still getting comfortable because he didn’t play the first semester. He just got eligible mid-December, so it’s a process for him. Hopefully we can build on this. We have a couple of home games here.”

Pitt would go on to lose the next game 78-73 to Central Oklahoma. Walker, though, led his team in scoring once more with 20 points and five dimes, while Womack and Antonio Givens posted 17 apiece.

The Gorillas (6-9) will take on Central Missouri on the road Wednesday.