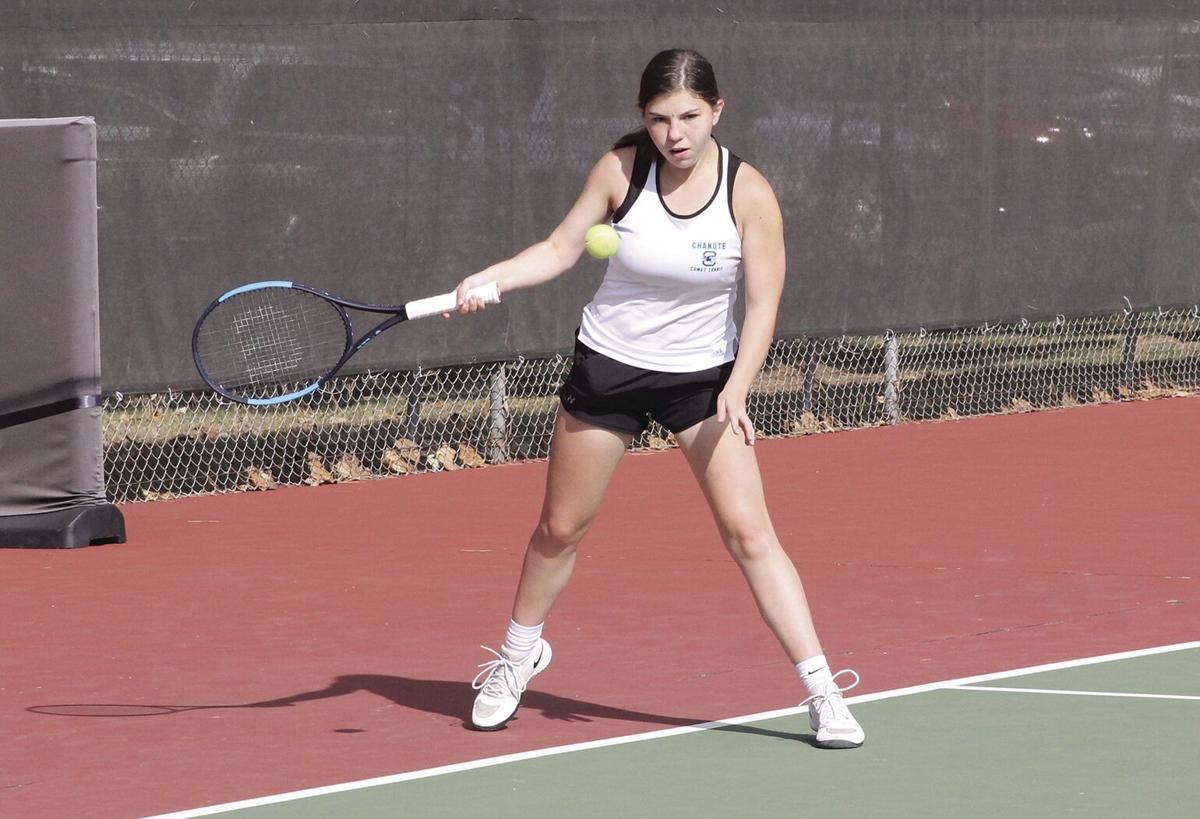 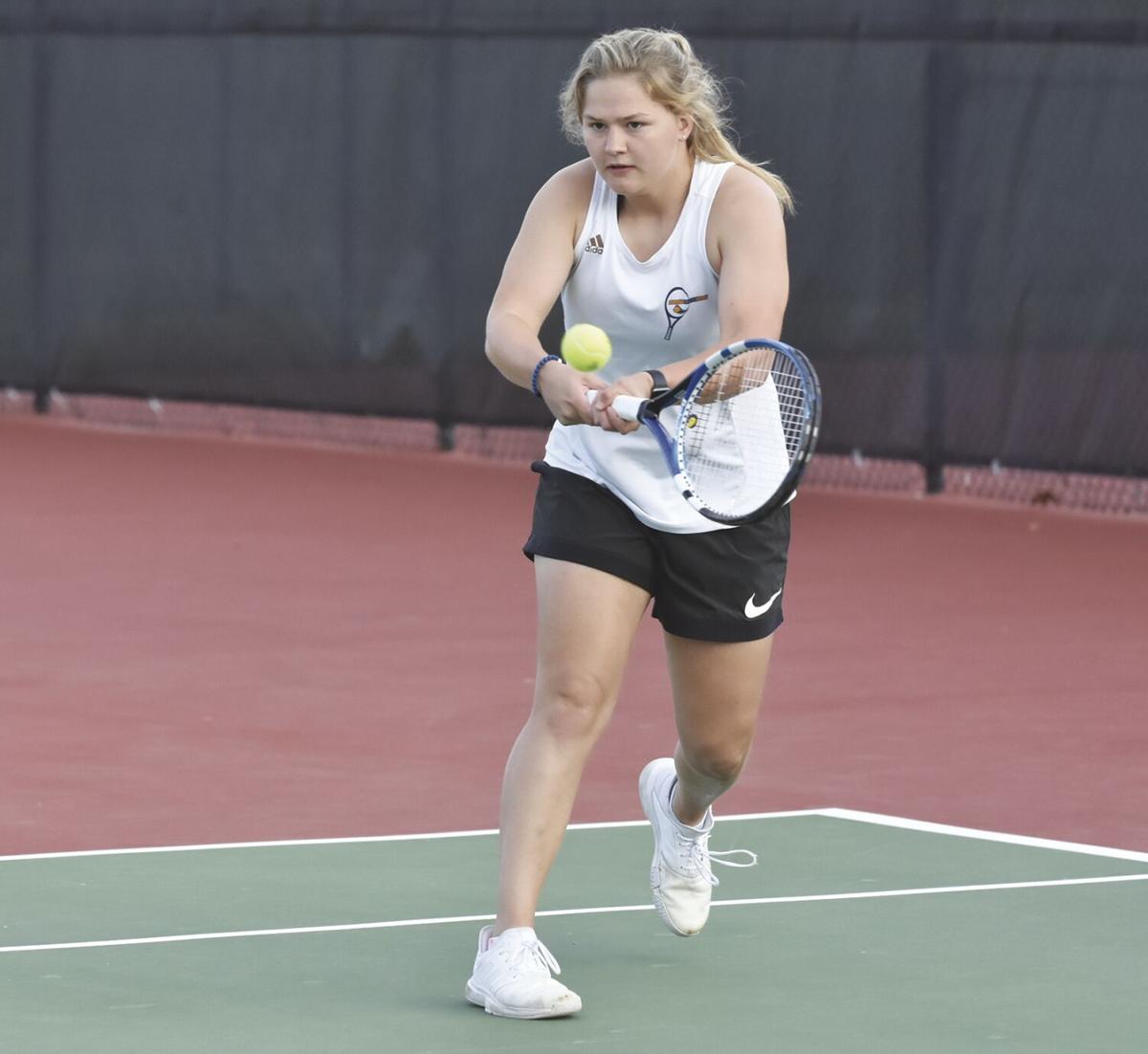 It’s been a few weeks since Chanute High School tennis finished the year at the Kossover Tennis Center in Topeka Oct. 16 and 17. That was the site of the State Championships, where senior Kori Babcock went up against the 2019 defending Class 4A champion in Wichita Collegiate player Emma Mantovani, and junior Aimee Maxton faced the No. 1 overall seed and eventual State champion in Wichita Trinity High School’s Isabella Sebits.

Both of Chanute’s State players lost, but it is no slight. In fact, that was a moment to celebrate. Longtime CHS head girls tennis coach Mike De La Torre couldn’t help but think about how the whole 2020 season went.

“Overall, I was really happy and pleased with how the girls played during the summer and also during the season,” he said. “They worked hard and to be honest, I knew I only had one senior and one junior, and the rest of the lineup would have to come from sophomores and freshmen. I was concerned about how the wins and losses would come out, but always my goal is to try to make every player better. And low and behold, they worked so hard. We did a lot better than I thought we would. I think the main thing is, I’m just overall pleased with the improvement each girl made.”

Chanute this year tied for third in League and third in Regionals. For the State individual players, Maxton amassed 18 wins and 10 losses, while Babcock tallied 17 wins and seven losses.

“I had really good placement during my games and my serve was pretty good when they went in,” Maxton previously said about State play. “It was a really awesome experience to be able to play in State and the location was really cool. I hope next year I will be able to go again.

“I currently take the weights class and go to the gyn when I can,” Maxton said. “I plan to start getting back on the courts after it starts to get warm again, I’m going to work on my serves and overhead shots this summer as well as placement. I’m looking forward to next season consideriong that is going to be my last and I want it to be my best.”

The 17 wins Babcock racked up added on to her 55-29 record. De La Torre couldn’t say enough about the impact Babcock had on the program for three years.

“She had an outstanding career for us,” De La Torre said. “She was very instrumental in our success, and got us a lot of points with all those wins during the three years that she played for us. Kori did a magnificent job this year and throughout her career.

De La Torre is proud of his entire team, but some of his fondest moments include Babcock and Maxton qualifying for State. And because of the coronavirus pandemic, the very first tournament in August was a victory for De La Torre.

“A lot of why that is so special is because we were trying to abide by the rules and protocols by KSHSAA and by our school board because of COVID, and just the fact of starting a season, that was really good,” he said. “And so having our first feet under our belt, that was exciting. And is it turned out, we were able to have a complete season. So glad about that.

“We need to give a special thank you to the Board of Education members, the administration at USD 413, and the administration at CHS, especially our Athletic Director Zack Murry for setting rules and protocol for us to follow throughout this different and unusual season. The guidance they gave us and the fact that we were blessed not to have anyone on our team quarantined or catch the virus enabled us to have a complete season.”

The next step will be training after Memorial Day, when KSHSAA allows tennis players to start practicing voluntarily. It is De La Torre’s hope that next year’s players will come out as focused just as they did this year. And of course, there will be an annual summer camp.

Another hope for De La Torre is that if COVID-19 cases flatten, colleges will host tennis camps like they did in the past. Last year, tennis camps across the state were cancelled due to the pandemic.

For now, though, De La Torre wants his players focused on the immediate future. Players participating in winter and spring sports should prepare adequately, as being in top physical condition will help for tennis training after Memorial Day.

Maxton will be returning, and will need to be in top shape for next year. Others are sophomores Grace Thompson and Tyra Bogle, the No. 1 Doubles team, and No. 2 Doubles sophomores Lena Aguilar and Gracie Palet.

“Grace Thompson and Tyra Bogle, they are so athletic,” De La Torre said. “They’ll be playing basketball. I think Grace is an outstanding softball player, too, so those two I don’t worry about conditioning because they’re just very athletic and they get in other sports, too. Gracie and Lena, I don’t know if they’re going to do other sports. Now Lena wrestled last year, so I’m hoping that she’ll do that again. I like for the girls that play tennis to also go out for other sports in the off-season to continue the Lady Blue Comet tradition and just participating in other sports. I always felt that that helps in their tennis game, too.”

All in all, the future looks very bright for the Blue Comets, though the team will miss Babcock. Still, the other five who played at SEK and Regionals will return.

Reinforcements from the middle school will also play a pivotal role for Chanute next year.

“Then we will also have the first group of players from the first season of Royster Middle School tennis,” De La Torre added. “So Coach (Max) Ruark and I are very excited about the future of our Lady Comet tennis program.”