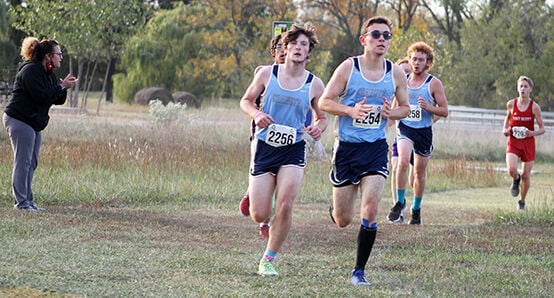 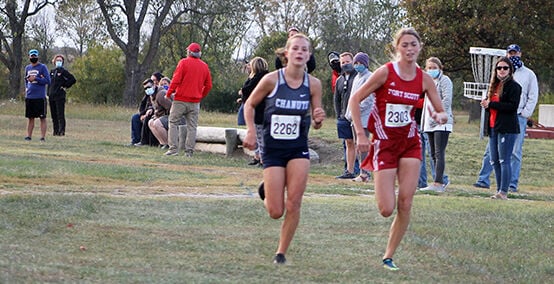 On a mildly chilly day with dozens of cross-country fans cheering on their favorite athletes at Lakeview Recreation Area, Chanute High School showcased its running talents at the SEK League meet.

“We had a really nice day to run. We got the hot temperatures out of here,” CHS head cross-country coach Brett Rinehart said. “It was pretty breezy, but that really affected them on one part of the course, so it wasn’t a major factor of the race. The boys division was extremely competitive this year – one of the better year’s I’ve seen in the conference. Pittsburg (first place) and Fort Scott (second place) were just super solid.”

Three of Chanute’s running stars were able to medal. Senior Jerica Hockett was the lone CHS student-athlete who ended the day with an All-SEK nod – her first, as last year she was All-SEK Honorable Mention. Hockett on the day ran a 22:27 and claimed sixth place, which was good enough to medal amongst 26 varsity girls in a 5K race.

“Really proud of Jerica,” Rinehart said. “That was really close to her best time, but definitely a great race. She’s got a shot next week at Regionals. And that’s exciting. I’ve been really proud of her all year long. She’s just come a long way since her freshman year.”

“It feels good,” she said. “I never medaled in a varsity meet until this year; it’s just crazy to me. I would have never guessed at the beginning of the season that I would be where I am. I felt good during the race, especially since it was a home meet. I felt I had a bit of an advantage.”

Freshman Natasha Ornelas medaled, too, placing first after running a time of 24:30 with five other junior varsity girls in a 5K. The other medalist for Chanute was freshman Jake Caldwell, who finished in ninth place with a 23:18 time amongst 20 other JV boys in the 5K.

Rinehart had some thoughts on Ornelas.

Another runner to look out for is Caldwell, who came back from injury on Thursday.

“It’s good to see him get a little success at the end of the season,” Rinehart said. “We’ve just got to get our numbers back up and keep building so we can team-wise get back up in the top of the standings where we like to be.”

Future Husker with Seth Malcom: Eight-man star does it all for Fremont-Mills

“From the beginning, you’ve got to run a pretty hard first mile, then you’ve got to conserve some energy for the second mile, because you notice, people start to lose their momentum in the second mile, so when they do that, you’ve got to start to kick it in so you can beat them in that,” Godinez said. “I think I was able to execute it pretty well. If I saw a person, I would try and beat them, and the next person, you got to try and just keep on moving on. I think my training has really paid off.”

In varsity girls, several runners grabbed an All-SEK Honorable Mention selection: Senior Riley Goracke with a 17th-place finish and a 24:21 time; freshman Mackenzie Crapson in 18th place and a time of 24:31; and junior Maddy Hughes with 20th place and a 24:43 time.

Paxtor, who will be going after a spot to cheerlead with Neosho County Community College next year, was noticeably emotional after he crossed the finish line.

“It wasn’t the result I was waiting for,” Paxtor said. “At the end, I was hoping to at least be a little bit better than my last race just because this is my hometown and I ran it, and I was comfortable with it. But it wasn’t the result I wanted and I was really in pain at the end, so I got a little emotional. I like the course just because it’s flat. I think the competition was just a little bit high. I was actually looking forward to it, but it’s a competitive sport. I have definitely gotten better since the first time I even ran cross country.”

Banks, on the other hand, is a newbie at the high school level.

“I stuck with one of my best friends in Brock, then I started to slow down a little bit, and my knees started to hurt, but then I told my body to basically to breath and then when I saw the finish line, I started to go,” Banks said.

As a unit, Chanute was third in girls varsity with 76 points, while varsity boys were fifth with 112 points.

Hockett, Goracke, Crapson, Godinez, Jesseph, Wilson, Guan, Banks and Paxtor will do all they can to carry Chanute as a team next week. Junior Bryce Bingham, who was an All-SEK runner last year but didn’t participate in this year’s SEK meet because of a back injury, will also run. Rinehart will see if junior Bella Becannon will be ready to race as well.

The Kansas Cross Country Class 4A Regionals are slated for next Saturday at the Lakeview Recreation Area. Girls run at 10 am, while the boys start at 10:40 am.

“I think it’s always nice to run the regional course beforehand and not only did we get to run on it in practice, we got to race on it,” Rinehart said. “Kids get real familiar with the course, and they get to know their strengths and weaknesses on it, and they just have a little bit of a better idea than some other competitors. I think that’s an advantage for us, especially if it comes down to a close race between two kids. Hopefully we get some great weather like (Thursday).”