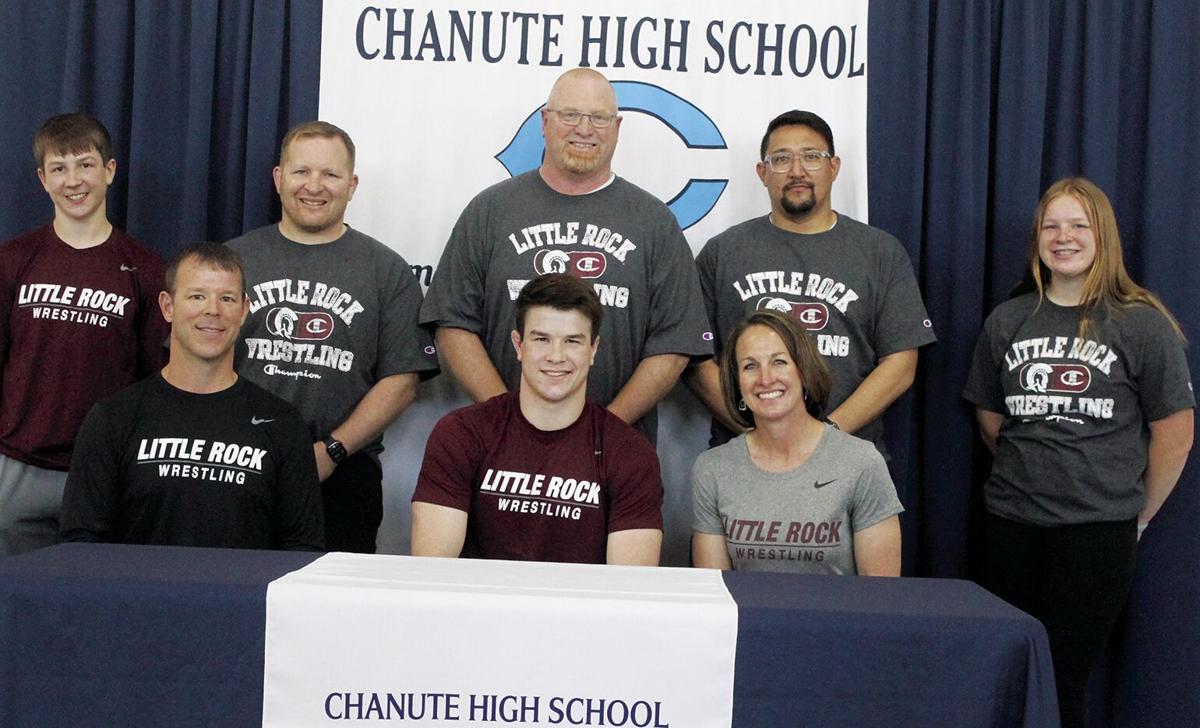 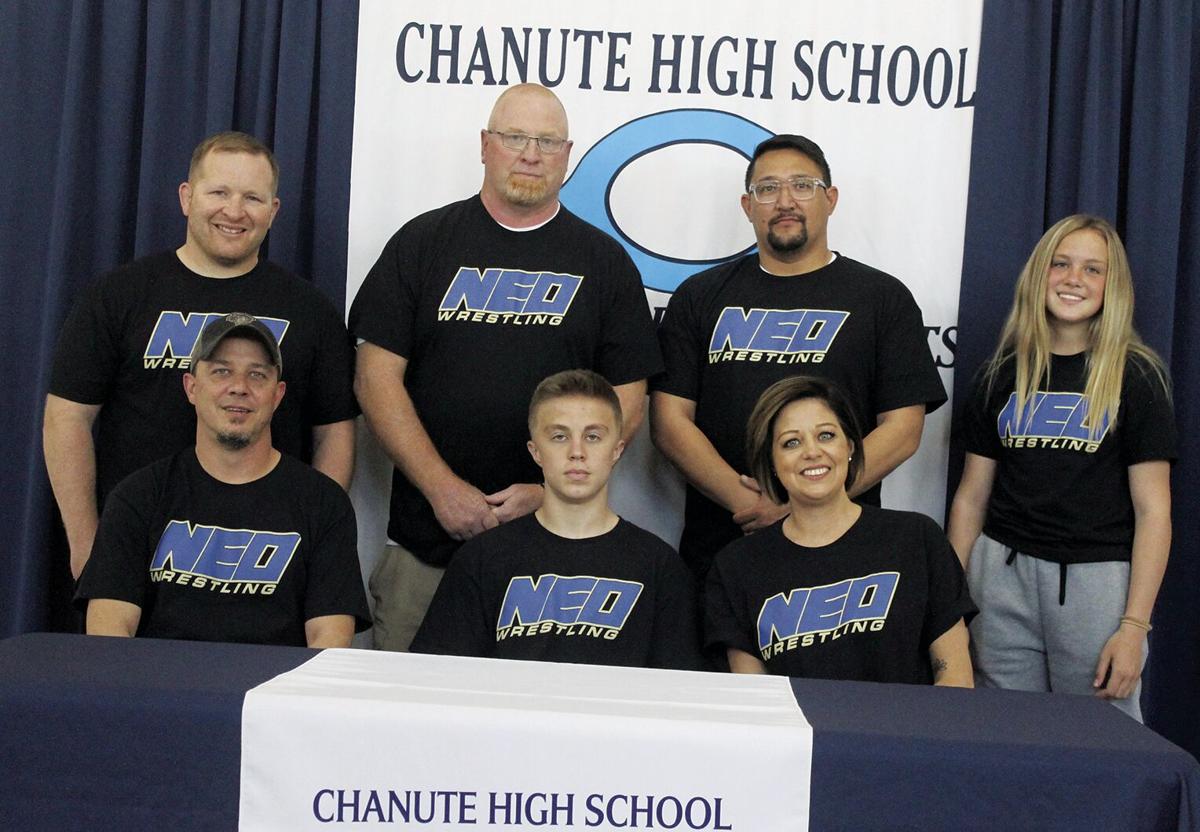 In the top row from left to right are Andy Albright, Rusty Emling, Charles Bishop, and Reese Clements. And on the bottom row are John Clements, Trent Clements, and Becky Clements.

In the top row from left to right are Andy Albright, Rusty Emling, Charles Bishop, and Reese Clements. And on the bottom row are John Clements, Trent Clements, and Becky Clements.

Two of the top wrestlers in the history of Chanute High School signed on to attend the colleges of their choice.

On Wednesday at Chanute High School, State champions Brayden Dillow (182 pounds) and Trent Clements (126) put ink to paper and made it official. Dillow is going to Pac-12 school University of Arkansas at Little Rock, and Clements will attend Northeastern Oklahoma A&M College.

“I can’t be anything but be thankful. I definitely had a hard journey, but I had great coaches and family, and I can’t help but just be thankful for everything that I’ve had,” Dillow said.

Dillow said he chose to go to a Division I college long before the actual signing. As a freshman, Dillow made a pact with CHS head coach Andy Albright: Dillow would focus on business in the classroom and Albright would take care of the wrestling side of things.

Both worked out, as Dillow excelled in the classroom and on the mat. He said he chose the University of Arkansas at Little Rock over Grandview University and the United States Air Force Academy because the university is a D-I program, has potential, and is the right distance from Chanute. In college, Dillow said will study pre-med, following in his father’s footsteps.

“My parents and my brother and sister (have helped me),” he said. “My parents, I’ve been through a lot of different weights this year, different diets and different workouts. They’ve always been supportive. My brother can be a pain, but he’s just very competitive. He’s just as competitive as I am and that helps to have somebody like that in my house. ... We had such a great coaching staff. And even Coach (Clete) Frazell in football. I’ve had him all the way up to my junior year. Just having all those types of coaches around with him and Albright, it’s kind of hard not to reach your potential.”

What kind of movement did spring ball prompt in the Huskers' projected defensive depth chart?

In Packers rookie Amari Rodgers, Randall Cobb sees himself — only better: ‘He has the potential to be way better than I was’

In 2020, Clements won a State title, and this past year, he was a State runner-up, and went 33-1. Clements was also very thankful for the opportunity to sign with NEO.

“My parents, my coaches, my teammate, they’ve all invested a lot of time. The money, the time, everything that my parents have put into me from youth wrestling up until this point,” Clements said. “People thought we were crazy, but think it kind of makes sense now.”

Clements said he chose NEO because he was impressed by the success that head coach Joe Renfro has enjoyed, including winning seasons that date back at least eight years.

NEO is also a frequent opponent of Neosho County Community College, and if there is an opportunity to be on the mat opposite old friends Brady and Logan McDonald – both wrestlers helped Chanute win a State title in Salina in 2020 for the first time in school history – Clements said he will be all business.

“My coaches, Coach Albright, Coach (Charles) Bishop, Coach (Rusty) Emling, Coach Frazell for three years, they really invested a lot,” Clements said. “My brother got me started in the sport. I owe a lot to him. We had a year together in high school wrestling. That was pretty special. My sister (Reese Clements), we got to wrestle some this year, and I’m excited to see where she’ll go...”

Albright said he is proud of his athletes who join six other wrestlers from CHS currently competing collegiately.

“I’m extremely proud of both boys in what they’ve done in the classroom and what they’ve done on the mat. They couldn’t have got where they are today without the support of family and friends and Chanute High School. They’ve been very blessed,” he said. “And I’m happy to see them chase their goals and see what happens in the future. And who knows, they’re going to get a good education and they might be teachers and doctors and come back and give back to this community.”