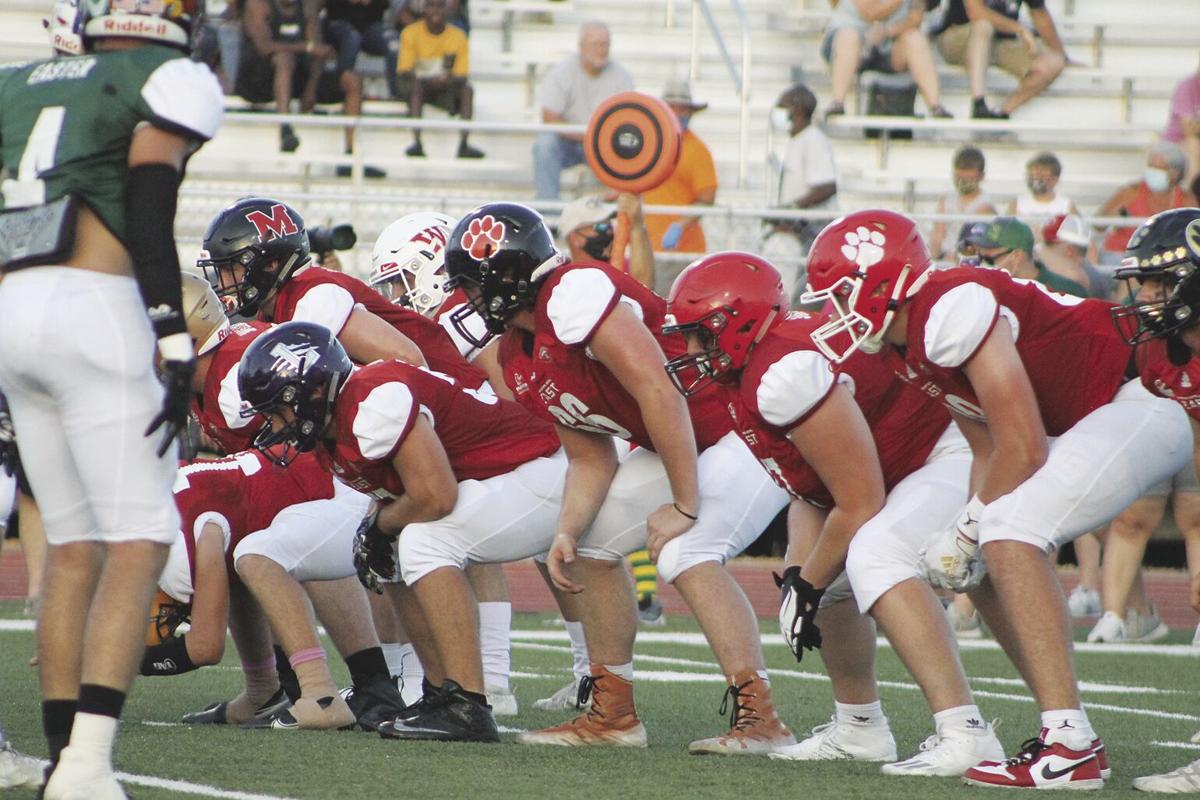 Josh Hull (Humboldt black-and-orange helmet) and Caype Johnston (red Erie helmet) line up next to each other in the 47th annual Shrine Bowl in Topeka on Saturday, July 18, 2020. 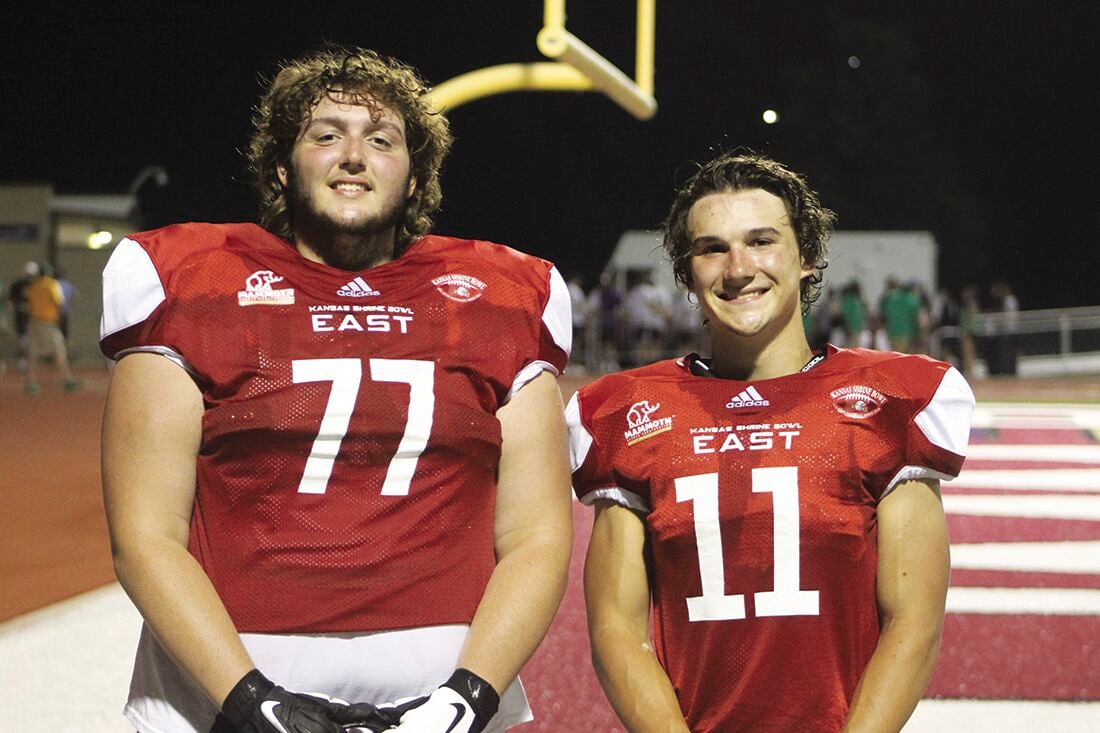 Caype Johnston and Adam Alberini stand next to each other after a hard-fought East versus West all-star game in Topeka. The West won 14-9 in the 47th annual Shrine Bowl.

Josh Hull (Humboldt black-and-orange helmet) and Caype Johnston (red Erie helmet) line up next to each other in the 47th annual Shrine Bowl in Topeka on Saturday, July 18, 2020.

Caype Johnston and Adam Alberini stand next to each other after a hard-fought East versus West all-star game in Topeka. The West won 14-9 in the 47th annual Shrine Bowl.

TOPEKA – Fans with face masks were pumping fists, elated their team had just moved the pigskin for a first down, a big play or a touchdown. Some of the best senior football players in the state of Kansas were on the sidelines of the 47th Annual Shrine Bowl, representing their high schools, exhilarated to be playing an actual live football game.

This was an event that not even the COVID-19 pandemic could hamper. On a humid, bright and sunny Saturday evening, close to 1,700 people in the stands and dozens of players donning their respective high school team’s helmets at Hummer Sports Complex in Topeka, a football game was played. It was just the third football contest to take place in the United States since COVID-19 was declared a national disaster. In the end, the final score was 14-9, West All-Stars over East All-Stars, upping the West team’s historical record of 29-17.

While every player wants to actually win the game, local area kids on the East squad couldn’t but reflect on some of their best moments of the game.

Two huge moments for the East’s left tackle Josh Hull from Humboldt High School were when fellow HHS teammate and running back Conor Haviland rushed in for a 1-yard touchdown on a fourth down play with less than 11 minutes to go in the fourth. That made the score 14-9 West after a failed 2-point conversion attempt and the infamous touchdown catch late in the fourth by Fort Scott tight end CJ Horton that was called back due to a questionable offensive pass interference call in the all-star game. Horton’s touchdown would have given the East team the lead and in all likelihood, a win.

“Definitely when we kicked back, and you know the refs kind of didn’t give us one and then they didn’t give us another one later, but those were the deciding ones, kicking back and the O-line working together, getting blocks for the QB,” Hull said after the game. “We made the play at the end and it just didn’t end up how we wanted it.”

Hull (6’6”, 265 pounds) made plays all year for his HHS team, anchoring the offensive line for the Cubs that led to a second-straight one-loss season and one of the best rushing attacks in the Tri-Valley-League. Hull’s skill level and technique that led to a football scholarship to Emporia State University didn’t change in the Shrine Bowl.

“We played against some really good D-ends. They had a lot of good footwork, a lot of good pass rushes,” he said. “Yeah, just kicking back and really just dance around, using my feet.”

Another local area offensive lineman in on the action when Haviland scored the touchdown was right and left guard Caype Johnston (6’3”, 290 pounds) from Erie High School.

Like Hull, Johnston did his best to neutralize defenders running in the A and B gaps. Johnston played every other possession at right and left guard, and much of the time he won his battles, which is one of the reasons why the East should have pulled out the victory.

“There were a few double teams with me and my center (Riley Wagner of Emporia High School), but we had a couple key double teams on the Derby nose guard (Derby High School’s Tyler Dorsey),” Johnston noted.

Johnston will use his technique at Kansas State Wesleyan, Salina, where he will play football on a scholarship.

St. Paul’s Adam Albertini didn’t enter the game until the second quarter and played sparingly as a slot receiver. His most notable play of the game was a pass he caught for 9 yards on third and 14 with 3:36 to go in the third.

Greg Hansen: The Pac-12 is right: Sports aren't life and death. The games can wait.

“Any time you get the ball, that is memorable. I had a nice little screen pass over there that I made a couple guys miss on a broken tackle; that’s definitely memorable,” said Albertini.

Haviland’s touchdown was also memorable to Albertini. The two are good friends, and were inseparable throughout the game on the sideline. With Albertini being a team-first player, he was happy to see one of his buddies chalk up some success on the field.

“One of my favorite plays was watching a good friend of mine, Conor Haviland score the only touchdown on the team,” Albertini said. “He punched it in from a yard out, which was something that we always talked about playing together and everything, and for us to do it and for both of us to be able to make an impact on the game, those are both tremendous plays in my opinion.”

Albertini will use his playmaking ability as a running back at Pittsburg State University as a redshirt freshman. Last year as St. Paul’s wildcat quarterback, he mustered up 57 total touchdowns while throwing for 402 yards en route to a 10-1 record and a trip to the Kansas State quarterfinals.

Sixth-year East coach Steve Buhler, head coach at Washburn Rural in Topeka, put these players in the best position to succeed, and his decisions resulted in just a one-score loss.

“We had a lot of opportunities,” Buhler said. “...a lot of times in all-stars games, that’s going to happen. It’s one of those games where you hope you get the toss and a defer and put them in a hard spot. But you know we hung in there, we were persistent. We had our opportunities when we were inside the 20 four or five times. We missed a field goal. So we gave ourselves a chance, but we weren’t able to capitalize.”

The East gave themselves chances throughout the day. With the game stagnant thanks to some great defense in the beginning, the East team picked off a pass with six minutes to go in the first quarter, putting the team in position for an 22-yard field goal. This put the first points on the board of the game – a 3-0 lead with 3:57 to go in the first.

A quarter later, the West rushed for a 1-yard touchdown, followed by a successful 2-point conversion, grabbing the 8-3 lead with 5:23 left in the second.

It wasn’t until the second half that the West sealed the deal, however. On a first-and-10 play, the West team ran for a 44-yard TD with just about eight minutes to go in the third, making the score 14-3 after a failed 2-point conversion.

On a play that set up the Haviland touchdown, the East team hauled in a pass for 38 yards that put the team on the seven-yard line with 10.3 seconds to go in the third.

Haviland on the day had six carries for 14 yards and a touchdown, while Albertini registered two catches for 12 yards.

The West’s Dalton Miller won MVP honors thanks to his five rushes for 52 yards and a touchdown. His team rushed for 133 yards versus the East’s 45.

Although the game is important, the event itself is the real attraction, as it benefits the Shriners Hospitals for Children. The nonprofit has raised more than $2 million to assist those hospitals, which never charge for their services.